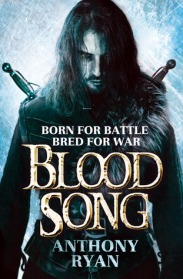 The Raven’s Shadow trilogy is a fantasy series by Anthony Ryan. The first book is Blood Song (first published in 2011), followed by Tower Lord (2014) and Queen of Fire (2015). The books chronicle the life of Vaelin Al Sorna, the son of the King’s famed and feared Battle Lord, after he is severed from his family and deposited into the Sixth Order. A religious sect dedicated to transforming children into elite and deadly warriors. They are bound to the tenants of their faith, and famed for their prowess.

The brothers of the Sixth Order are wherever the fighting is the hottest and wherever the deadliest foes threaten the realm. They are trained to show up, outclass, and annihilate foes – then mic-drop on the way out. This series delivers.

Blood Song is the academy book of the series. The formative years. One of the best of its kind. Blood Song delves into the training of Vaelin and his peers as they are moulded into men who will be the vanguard in combat and conflict throughout the realm. It is a coming of age story, and it is a vital book. It forms the foundation, the relationships, and the personalities that prop up and propel the story over the course of the trilogy.

It is amazing. I loved the trilogy, but Blood Song is something special. I’m going to keep this a spoiler free review, as usual, so Blood Song (Book One) will be the book I focus on here. So, what does the synopsis say?  END_OF_DOCUMENT_TOKEN_TO_BE_REPLACED

Neal Stephenson is a challenging and erudite author. He is the writer responsible for Snow Crash, one of my favourite books, along with classics like The Diamond Age, Cryptonomicon, The Baroque Cycle and Anathem. Lauded, celebrated and awarded – Neal Stephenson has many laurels. When SEVENEVES hit shelves around the world Barack Obama, then POTUS and leader of the free world, earmarked it for his summer reading. When the POTUS dedicates time to kicking back and reading a Sci-Fi novel, you know that it isn’t an ordinary book.

END_OF_DOCUMENT_TOKEN_TO_BE_REPLACED

Dawn of Wonder is the first book in a fantasy series by Jonathan Renshaw called The Wakening. The book follows Aedan, a precocious but damaged boy, in a coming of age story amidst a backdrop of strange events, political threats and turmoil.
It’s notable to mention that Dawn of Wonder is a self-published work. That is nothing new, but Dawn of Wonder belongs to a qualitative batch of polished and compelling books that have emerged in the past few years without the initial backing of a publisher. This is really exciting, as good stories deserve to be told, with or without the approval and support of a traditional publishing house. END_OF_DOCUMENT_TOKEN_TO_BE_REPLACED

I was incredibly excited to dive into this book. After the tremendous impact of A Head Full of Ghosts, it was an immense relief to know that I had another one of Paul Tremblay’s books up my sleeve. So, it was with extreme anticipation that I dived in to A Disappearance at Devil’s Rock, and I was not disappointed. This book is every bit as complex, nuanced and emotional as A Head Full of Ghosts, and in some ways it pushes the boundaries even further. The ambiguity and unique readings of Ghosts is present here too; it’s becoming a signature, and one I relish the opportunity to experience. Paul Tremblay’s fascination with the parallels between the supernatural and psychosis make for thrilling reading. END_OF_DOCUMENT_TOKEN_TO_BE_REPLACED 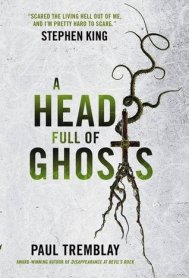 A Head Full of Ghosts by Paul Tremblay is a book that I needed to read. I’ve seen it mentioned on my twitter feed for a while, and now I’m kicking myself because I’ve been deprived of one of the best novels that the horror genre has had to offer in years. You really should read this book too. Read on and let me convince you. END_OF_DOCUMENT_TOKEN_TO_BE_REPLACED

Stranded by Bracken MacLeod (published by Tor Books) drew me in immediately. The book is complex, dark and unapologetically cryptic. The book is atmospheric, tense and mysterious in the tradition of some of the greats in horror fiction. This book will sneak up on you, twist you with dread and suspicion, and then fade away leaving you wondering if it’s truly gone or still out there in the darkness. END_OF_DOCUMENT_TOKEN_TO_BE_REPLACED

The Ferryman Institute by Colin Gigl, published by Gallery Books, is a delight to read. The cover and the blurb drew me in while I was browsing books, so I was expecting something interesting. It was Colin Gigl’s excellent plot, world building and characterisation that kept me reading, though. This book is fantastic. It is thoughtful, complex, frustrating and often hilarious. Gigl delivers on every promise the jacket blurb offers, but he enhances it, elevates it, and ascends the book with his strategic use of emotional highs and lows and an enviable control of conflict. This book, suffused with death, becomes more about the gift that life is; something that really resonated with me. END_OF_DOCUMENT_TOKEN_TO_BE_REPLACED

The Fifth Season by N.K. Jemisin, published by the ever awesome Orbit Books, won the Hugo award this year for best novel. Hype often repels me, I have been disappointed before, but the premise sounded great. So, with a mixture of anticipation and trepidation, I bought a copy and waded in.

So, straight into it. My impression? This book is wonderful. It is beautifully written, with a vivid but light and accessible style. It is utterly unpretentious, and fiercely intelligent. END_OF_DOCUMENT_TOKEN_TO_BE_REPLACED 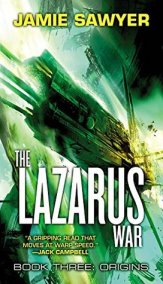 I haven’t written about the same series twice before. I like to write about them once they are completed, so that I can come at the review and analysis with the full picture and a resolved plot. It is definitely a neater way to do it so I’ve tried to maintain that. This becomes a problem with a series, especially an ongoing one, so I suppose this will be something I face on this blog again in the future. Especially when I read a book that is so good, that gets me so excited about it, that I just have to write about it, to tell people about it. The Lazarus War: Artefact was one of those. You can read my initial review here.

So, I blasted my review off after finishing Artefact, in the afterglow. I was immensely excited by the knowledge that the third book in the trilogy had recently been released. The full trilogy was ready for me to binge on. I didn’t really think about it at the time, but now that I’ve finished Origins, I need to come back to it and write about it again, as a whole. END_OF_DOCUMENT_TOKEN_TO_BE_REPLACED

The Lazarus War is a Sci-Fi trilogy by Jamie Sawyer. The first book is called Artefact, published by Orbit Books.

Artefact is a pure, concentrated page-turner. It is compulsively readable and incredible fun. Sawyer is clearly a huge fan of Sci-Fi subculture, and that works just fine for me. He evokes the tense and powerful Marine group dynamic of Aliens, the interstellar travel and stacked odds of Jack Campbell’s Lost Fleet series, while tossing in the awesome notion of armoured space marines fighting repellent and hyper aggressive alien civilisations. It soars.

The first book is an explosion of conflict, intrigue and world building. END_OF_DOCUMENT_TOKEN_TO_BE_REPLACED