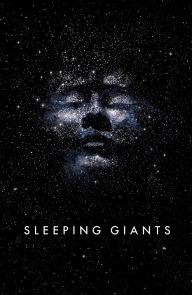 Sleeping Giants by Sylvain Neuvel is the first book in a series that he has dubbed The Themis Files. I found this one entirely by chance while browsing a bookstore, and after reading the blurb I knew I had to experience it. At this stage it is looking to be at least a trilogy, with Sylvain Neuvel implying that there could be more. Sounds great to me. The sequel, Waking Gods, is due for release in April this year. So this is the perfect time to jump in and grab this one. The wait will be far less agonising for you.

A girl named Rose is riding her new bike near her home in Deadwood, South Dakota, when she falls through the earth. She wakes up at the bottom of a square hole, its walls glowing with intricate carvings. But the firemen who come to save her peer down upon something even stranger: a little girl in the palm of a giant metal hand.

But some can never stop searching for answers.

Rose Franklin is now a highly trained physicist leading a top secret team to crack the hand’s code. And along with her colleagues, she is being interviewed by a nameless interrogator whose power and purview are as enigmatic as the provenance of the relic. What’s clear is that Rose and her compatriots are on the edge of unraveling history’s most perplexing discovery—and figuring out what it portends for humanity. But once the pieces of the puzzle are in place, will the result prove to be an instrument of lasting peace or a weapon of mass destruction?

Sleeping Giants is an epistolary novel. The book is the collection of a series of documents that form and progress the narrative. I love this idea and I found the format to be incredibly compelling. Neuvel succeeds in dropping tantalising crumbs and hinting at the bigger picture throughout. He never reveals too much but leaves you wanting more. The G-man I mentioned earlier is the central source of the documents that comprise the novel, surrounding a central cast of characters that he has assembled forming the interviewees. My experience with epistolary novels is admittedly low, but I found that it really worked. It resulted in a fresh and captivating way to administer and delivery a story, while also maintaining a surprising sense of urgency and immediacy as events transpire – especially when you consider that we, as the reader, are accessing information on events that have already occurred. This in no way stops you from wanting to read the next page, to move to the next document to find out what happened next.

It becomes apparent very quickly following the discovery of the giant alien hand in the beginning of the novel that this is too old and too advanced to be human technology. We find that it was something left behind. The book explores who left it and why, but also what its purpose might be. It deals with the international implications of such a discovery to the global political landscape, and then even that is dwarfed by the notion that there might be something else out there, far beyond the abilities and technologies of human civilisation, rendering these conflicts almost infantile by comparison. It is a focused microcosm of the adjustments the world will need to make in order to accept the shift in world-view these discoveries will engender.

I loved this book. I was going through a pretty tremendous slump in reading recently. I wasn’t enjoying anything. This book changed things; it was the fulcrum that tilted the balance. If you’re after a uniquely delivered, ambitious and enthralling sci-fi novel you owe it to yourself to try Sleeping Giants. The Themis Files has the potential to be one of the great sci-fi series to come. I can’t wait to read the next instalment and discover where Sylvain Neuvel takes us.